If someone had told me in 2008 when I impulsively went to take a class at the Loft Literary Center that I would be writing and publishing a memoir, I would have told them to stop being ridiculous.  If they’d told me that it would take over ten years to finish that book, more disbelief would have followed. Finally, if they suggested that writing a book about losing my twin would be intensely healing and wonderfully regenerative I would have laughed in their face.  But the laugh is on me, since all of the above are true.

Many of you know that I am launching my hybrid memoir/astrology book on June 15, 2019 at 7:00 pm at 404 East 48th St. in Minneapolis, at the lovely work space of a colleague. Please come! I’m working hard to make it an event you will remember.

I’ve written articles for astrology magazines since the late 1970’s, published in other journals, almost wrote a book on eclipses in the 80’s, always to the praise of being a wonderful writer.  Also, I talk for a living, using language to bring alive what I see in a birth chart, or the cycles for the coming year. Both of those made me think that gathering my thoughts about being at Lou Ann’s side as she took her final breath would be easy or at least manageable. But it wasn’t. As I began doing that I realized there was a much larger story I wanted to tell; a story about growing up as a twin, and then becoming a singleton. A story about knowing things about people, the future, my own safety, things without logical explanation. A story about the love of my family and how community support and skilled grief counseling helped me come to terms with unimaginable loss.

Star Sisters went through many incarnations and working titles as I learned how to write a book. So many times I wanted to give up, throw all my hard work in the trash, but something kept me going. I learned through online classes (many thanks to Mary Carroll Moore) that in a book there needed to be plot, action arcs, developed characters, pacing, and setting, but along with that the structure of each sentence had to vary, the paragraph lengths needed variety, the use of language mattered, and most important: the book needed to be written for the reader. It took until the final incarnation, starting in 2016, for me to understand what it meant to write for the reader. 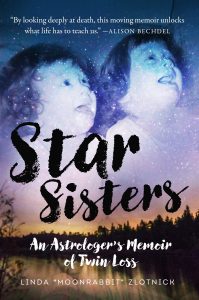 At first I wrote because I thought telling the story about how Lou Ann died was important. She had a “good” death, teaching everyone around her that transitioning to other side and embracing dying was beautiful. Maybe this book, I thought, could help people be less afraid of death. So I wrote about that.  But the very act of writing kept our twin connection alive, and that kept me writing. Through the early writing classes I was confused; there was too much to understand. Just describing events was not enough.  I had to show and not tell. Certainly two people in a room talking was not enough to keep someone reading.  My first version of the book, I learned through critique, was all about my twin and I was missing completely.  Gradually I learned that readers follow the author’s journey, learn through their struggles and breakthroughs, and that I had to write my truth.  Each revision became an exercise in showing up on the page and pushed me into realizing how much I liked to hide. It wasn’t until the final draft was almost complete and I took a writing intensive in January of this year I pushed through another set of barriers and revealed even deeper truths about my childhood, my relationship to my twin and myself.

Star Sisters is not only a story of twin loss and recovery, or how I used astrology to cope with Lou Ann’s death, but part of an amazing journey of self-discovery and personal growth.

You can purchase Star Sisters on Amazon or come to the book launch and get a signed copy!